This meme has been going the rounds of social media the last few years: 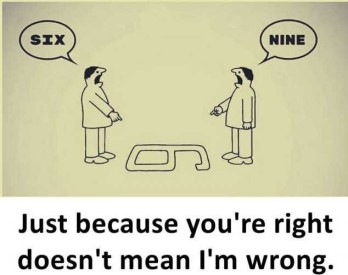 It’s shared by almost everyone trying to prove to other people that their side of the argument isn’t “wrong,” it’s just a different point of view. There’s only one problem: the meme itself is wrong, and has no basis in objective reality.

Let’s examine a few things. If there were no orientation points to speak of, both person in the meme would neither be wrong nor right – they’d just both have inconclusive statements. Take a look at this image for example:

Now, would you say that’s a 09 or a 60? If we’re to believe the people hewing to the meme above, it can be either-or, and both those saying it’s a 09 or a 60 would both be correct. But in reality, that’s not really the case, is it? Especially when these numbers find themselves in a cheque or a bank account statement. Suddenly, it’s important to find out who is correct.

Which is why ORIENTATION is always important. Without the complete facts of the case, we can’t define conclusively who is correct and who is wrong. However, we’re sure of one thing – one of them is definitely wrong.

Ahh. Now we see more clearly with the rest of the picture in place. If this were shown to you, would you still agree with the people saying it’s a 60?

Failures of logic like the meme above are commonplace in today’s online world. Children today are growing up untrained in the rigors of logic. In the U.S., a common curriculum would include the following subjects: Math, Science, English, History, Computer Studies, and Physical Education. Curiously, Logic, as a subject, is missing from the curriculum.

Unlike the ancient Greeks who considered Logic to be of utmost importance that they made it a standalone subject, together with Grammar and Rhetoric, which forms their Trivium, present-day educators treat Logic as a minor study, to be consigned within the major subjects of Math, Science, and English. It appears as elementary proofs in geometry, a discussion of fallacies in English, and a chapter of Boolean Logic in Computer Studies.

In a study conducted by Weinstock & Neuman (2004), results showed that students who were aware of “general argumentation norms,” or what we know as “rules of logic,” performed better at identifying fallacies than those who didn’t.

Likewise, in a successive study done by the same authors, they found out that when presented with context, students were able to correctly identify fallacious arguments compared with those who were lacking context (Neuman, Weinstock, & Glasner, 2006).

Children, it seemed, did not fail for lack of trying or for lack of brain power. They simply failed because they lack training in the art and science of logical thinking. This is a damning indictment of our educational institutions.

Take for example the difference between a fact and an opinion. It seems pretty straightforward for most of us. Quite common sense really. A fact is a statement which can be proven or disproven, while an opinion is a statement which cannot. And yet, to my horror, more than half of my students in senior high hardly knew the difference between the two. I had to teach the entire concept to them before I could proceed to teach writing as a discipline.

In a survey of 5,035 American adults done by the Pew Research Center, conducted between Feb. 22 and March 8, 2018, asking respondents to distinguish between five factual statements and five opinion statements, it was found out that more than a quarter of Americans got most or all wrong in their answers. Even more depressing, of those who got it correct, most were only able to identify three to five statements correctly. That’s as good as merely guessing.

And if you think you’re a bit better than the crowd, think about this: when I mentioned “fact” did you automatically associate it with “true” or did you somehow knew it meant “provable?” Because if you thought the former, then I have a bridge to sell you. The sad truth is, “fact” doesn’t mean “true.” It only means it’s a statement that can be proven or disproven using evidence. Let’s do the following exercise and see how well you fare in distinguishing factual statements from opinionated ones. 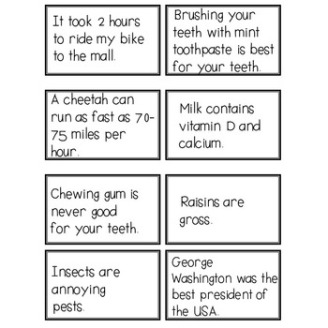 Of the eight statements, five are factual while three are opinion. Were you able to guess which three were opinionated? If you guessed the last three, you would be correct. Proving raisins are gross, insects are annoying, and that George Washington was the best president ever are all an exercise in futility because they are all rooted in subjective biases. Who is to say what’s gross and what’s annoying? How would we quantify the word “best” and how would we measure it? In contrast, proving how long it takes someone to ride the bike to the mall is fairly easy. As it is with finding out if mint toothpaste and gum are good for your teeth. A series of experiments can quickly settle the issue. Likewise, a cheetah’s speed can be measured objectively, and the contents of milk scientifically studied. By these precepts, we are able to determine them as factual statements. While factual, they aren’t automatically “true.” They’re merely statements which can be proven to be true or false.

However, things only get muddier from here on. There are indeed “facts” which are held to be “true.” They are called “scientific facts,” and are treated separately from “factual statements,” which are merely statements of provability. Scientific facts carry the weight of evidence behind them, and years of repeatable observation and reproducible experiments. The entire collection of human knowledge was based on the scientific method and the collection of empirical evidence to validate certain facts.

With those distinctions out of the way, let us proceed to a much more controversial topic.

Ever heard the term, “You’re entitled to your own opinion but not to your own facts?” It was either coined by Daniel Patrick Moynihan, James Schlesinger, or Bernard Baruch (depending on your sources) and would go on to infect a large portion of the populace, making them believe that hiding behind the curtain of “opinion” will excuse them from the challenges of rational thought. Sadly, since then, people have used the qualifier “it’s just my opinion” as a catch-all defense to avoid intellectual scrutiny and criticism. They believe that by categorizing their statements as “opinion,” they cannot be criticized or called to answer for it.

Except, that’s not really the case, is it? Going back to our definitions, these people have clearly tagged their views as opinion when it clearly veers into factual territory. Opinions are of such subjective nature that they cannot be proven or disproven conclusively. The arguments of which dessert is better, ice cream or chocolate, will go on ad infinitum because these arguments rest on the subjective definitions of one’s own palate. However, the argument of whether vaccines cause autism should be put to rest since mountains of evidence have been collected proving no link between vaccines and autism. In this case, “vaccines cause autism” is not an “opinion.” It is simply misinformed fact. A myth that grew from fraud and scientific misrepresentation by one person, which now poses a serious threat to worldwide health.

Everyone is still entitled to their own opinion, but no one is entitled to call their views or beliefs as “opinion” when it clearly isn’t. In this case, everyone is only entitled to what they can prove.

Popik, B. (2009, July 30). Everyone is entitled to his own opinion, but not his own facts. Retrieved from The Big Apple: https://www.barrypopik.com/index.php/new_york_city/entry/everyone_is_entitled_to_his_own_opinion_but_not_his_own_facts

Potpourri by Jao Romero is licensed under a Creative Commons Attribution-NonCommercial-ShareAlike 4.0 International License.
Permissions beyond the scope of this license may be available at https://jaoromero.com/contact/.